A Mediterranean-style diet dramatically cuts your risk of Alzheimer’s, a new study claims.

The Australian study found these results were virtually the same in patients across the globe.

Its release coincided with a US paper that drew the same conclusion.

The findings are the latest in a growing swell of research that sings the praises of ‘healthy fats’ for everything from bone strength to brain and heart health in later life.

Experts stress the across-board evidence provides important reference for public health policymakers as populations are set to age in the next 20-30 years. 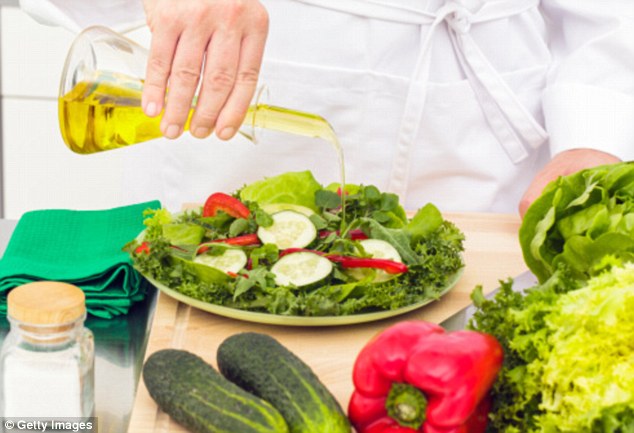 Eating high-fat food can reduce the risk of breast cancer, diabetes and heart disease – as long as it is part of a healthy Mediterranean diet, experts claim.

A review of 50 years of evidence concluded that eating unrestricted amounts of fat was healthier than any other type of diet, when it is done in the right way.

Scientists claimed that the ballooning obesity crisis – which for decades has been blamed on people eating too much fat – may actually be due to diets packed with sugar and food containing refined grains, such as white bread and pasta.

The research team found that eating Mediterranean-style food rich in olive oil, with lots of fruit, vegetables, beans, cereals, fish and whole grains, led to lower risk of certain diseases than traditional Western diets packed with sugar and refined grains – even when they had much higher levels of fat.

Study leader Dr Hanna Bloomfield, of the US Department of Veterans Affairs’ medical center, said: ‘What we found in our study is that healthy diets can include a lot of fat, especially if it’s healthy fat.’

‘Why is a higher adherence to the MedDiet related to slowing down the rate of cognitive decline? The MedDiet offers the opportunity to change some of the modifiable risk factors,’ lead author Roy Hardman from Swinburne University in Melbourne, Australia, explained.

The strong concentration of omega-3 and vitamins – coupled with low levels of dairy and red meat – reduce inflammatory responses in the body.

And it changes lipid profiles by using olive oils as the main source of dietary fats, rather than butter, milk or cheese.

This, in turn, keeps weight at a steady level, potentially reducing obesity.

To the researchers’ surprise, the benefits of the diet were not exclusive to older individuals.

Two of the 18 studies included in this paper – which collated information between 2000 and 2015 – focused on younger adults and they both found improvements in their brain function.

Like many researchers, Hardman takes his research home: ‘I follow the diet patterns and do not eat any red meats, chicken or pork. I have fish two-three times per week and adhere to a Mediterranean style of eating.’

Rosebud Roberts and colleagues analyzed data from 672 participants in the Mayo Clinic Study of Aging.

They found elderly participants who ate a Mediterranean Diet had better brain health and a lower risk for cognitive impairment later in life.

At the start, none of the participants had dementia, and they weren’t in hospice or terminally ill.

Participants described their diets in a survey and underwent tests for memory, executive function, language, visual-spatial skills and cognitive impairment.

The team found that elderly patients with higher Mediterranean diet scores had higher cortical thickness in all lobes in the brain. 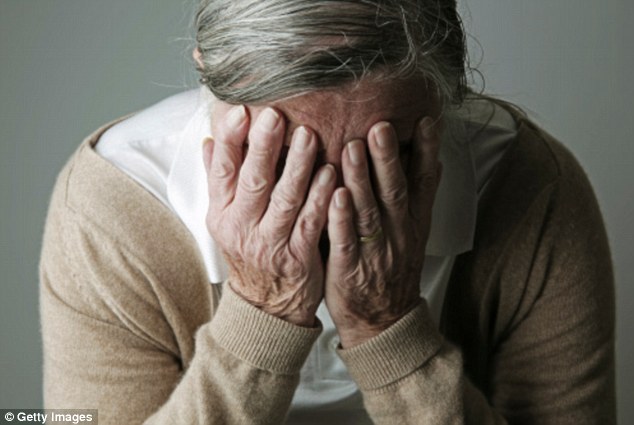 A lifeline? Elderly participants of the Mayo Clinic’s study who ate a Mediterranean Diet had better brain health and a lower risk for cognitive impairment later in life

Higher legume and fish intake, in particular, was associated with greater thickness, they reported in the journal Alzheimer’s and Dementia.

The study didn’t track patients long enough to see whether they actually developed any cognitive problems later on, however.

Gu wasn’t involved with the new study, but she and her team have found ties between the Mediterranean diet, brain volume and total brain matter in their own research.

But ‘these are observational studies, not clinical trials, so a causal relationship can’t be established,’ Gu said.

‘As many people know, we don’t have a cure for Alzheimer’s disease, and there is a long period of time before onset. It’s important to find lifestyle factors that could prevent or delay the disease,’ said Gu.

Although a doctor can’t prescribe a Mediterranean diet to elderly patients, it doesn’t hurt to follow it, Gu said.

‘Specifically,’ noted Roberts, ‘a high intake of fish, vegetables and legumes are beneficial, whereas a high intake of simple sugars and carbohydrates may have adverse effects on the brain.’

Would you have fat injected into your PENIS?