First-time parents are flooded with conflicting advice on how to transition their newborn from milk to food.

One idea is called baby-led weaning. Starting from the age of four months, put solid food in front of them, give them a spoon, and let them feed themselves.

In theory the approach helps infants acclimatize to normal solid food from the start, doing away with pots and pots of pureed gloop.

It is controversial – many parents fear this carries a higher risk of choking.

But according to a new study, there is no evidence to show baby-led weaning is any more dangerous than any other approach. 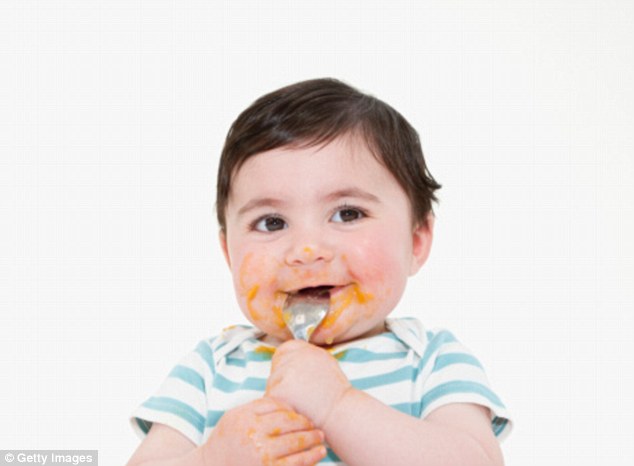 Researchers in New Zealand monitored a group of 206 infants, randomly assigning half of them to a baby-led weaning program, while the others were spoon-fed.

The mothers with babies on baby-led weaning programs were given advice on what to do in the event of choking, and received extra in-person contact from nurses and research assistants.

This group was also advised to wait until six months to begin the weaning process, at which point the babies would be able to sit up with ease.

The researchers then surveyed the parents at regular intervals (six, seven, eight, nine and 12 months).

They were asked how often, if ever, their baby choked – meaning a full piece of food became lodged in their airway.

They were also asked if the baby gagged – reacting to potential choking by pushing their tongue forward.

In the event of choking, they were asked more questions about how the choking was resolved, and what the food was.

All in all, they found no difference in the number of choking events between the two groups.

A total of 35 per cent of babies across the whole group choked. That 35 per cent consisted of an even share of baby-led and spoon-fed babies.

The problem, the researchers found, was that parents across the board offered babies food that could lead to choking – even those spoon-feeding their children.

‘Close supervision of all infants’ eating occasions (regardless of the method of infant feeding) is of paramount importance so that any unavoidable episodes of choking can be identified and managed promptly,’ Dr Rachael Taylor, who led the University of Otago study, said in her conclusion.