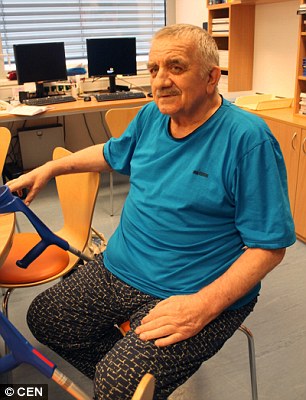 Josef Martinec, pictured after the operation, had gone to hospital with bad  back pain

A man who thought he was a bit overweight had a four stone cancerous tumour removed from his stomach.

Josef Martinec went to hospital with unbearable back pain – but thought it was because he had put on weight.

Doctors at  Tomas Bata Hospital in Zlin, in the south-east of the Czech Republic, examined him/

Scans revealed he actually had a 60 lbs (27kg) malignant tumour in his abdomen – although details of what type of cancer he was suffering from have not been reported.

Medics said he needed surgery immediately – despite the fact this would be risky as his health was poor.

Mr Martinec said: ‘The tumour was pushing at my kidneys, liver, and lungs and I had big problems with breathing some weeks before the operation.

‘I felt the end and it was my own decision to undergo the surgery although the doctors told me about the risk.

‘I told myself that I had nothing to lose.’

The six-hour operation to remove the tumour was successful, although he lost a lot of blood. 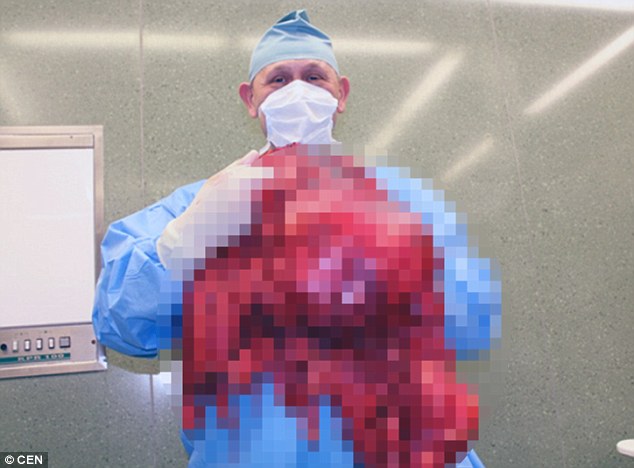 Surgeons removed the 4 stone tumour during a six hour operation at a hospital in the Czech Republic. Mr Martinec spent another six months undergoing cancer treatment 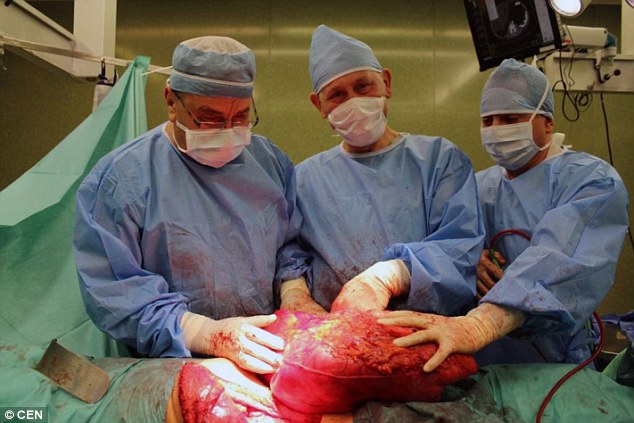 Afterwards, he had to stay in hospital for six months while oncologists treated his cancer.

It is not known if he will survive the disease, doctors warn.

Dr Jiri Klein, who runs the surgical ward at the Zlin hospital, said: ‘The prognosis is very unclear due to the character of the growing tumour and its connection to the structure of the abdomen.’

Tumours of this weight are not common in the Czech Republic, he added.

However, in 2013 the same team of doctors removed a tumour weighing nearly sixstone (36kg) from the stomach of 47-year-old woman.

And recently they cut out a two-stone (12kg) growth pressing on to the kidney of a 40-year-old man.