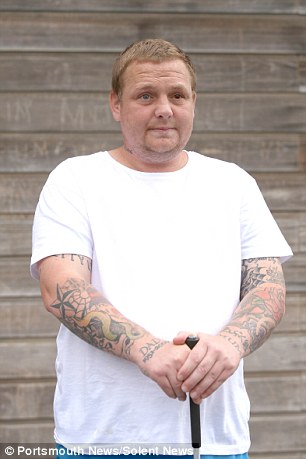 Mr Betteridge may also lose a foot to diabetes

A father has gone blind from diabetes at just 32 years old after smoking, eating junk food and avoiding going to the doctor.

Michael Betteridge, from Portsmouth, will never be able to see his children again after losing his vision – and may also have to have his foot amputated.

His eyesight began going blurry in May last year and he was diagnosed with diabetic retinopathy.

This is where high blood sugar levels damage the eye’s retina – and by September he was completely blind.

Now eating healthily, Mr Betteridge is sharing his story to urge others diabetics not to ignore doctors’ warnings.

He said: ‘Listen to the doctors and keep up with your appointments – it will pay off.

‘Don’t eat rubbish and smoke – smoking shrinks the blood vessels behind the eye, it is the worst thing to do.

‘I’ve just got to watch out now and keep the right diet.’

Mr Betteridge, a former tattoo artist, was diagnosed with hereditary type 1 diabetes at six years old, but said he thought he was invincible.

‘I was eating chocolate and crisps, fizzy drinks – just rubbish. I thought I could live forever.

‘When my eyesight was starting to go I was still getting on top of roofs for work. I was thinking “it’s just blurry eyes’ – but it wasn’t.”‘

In May last year Mr Betteridge’s vision started to blur, prompting him to go to the doctos.

Medics had been chasing him for months to attend check-up appointments to help manage his condition.

But his sight deteriorated and by September he was completely blind.

He suffered diabetic retinopathy – damage to the retina caused by diabetes – which is the most common cause of blindness in working-age people.

Diabetes affects the tiny blood vessels in the retina, damaging it and severely affecting eyesight. 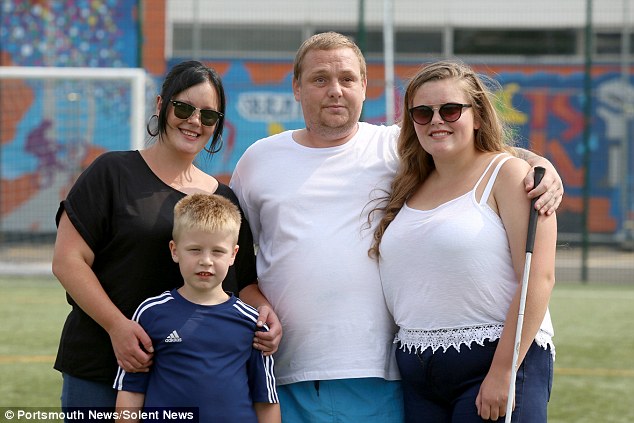 Now, Mr Betteridge says it is heartbreaking not being able to see his children.

He said: ‘I picture them as they are now. When they grow up they’ll still be little kids to me.’

His son Michael, six, and daughter Hallie, 15, now help him complete daily tasks around the house.

His partner, Charlotte, 31, added: ‘I didn’t know it could happen.

‘It’s hard but we get through it – we’ve got to, life goes on. There’s nothing anyone can do.

‘He’s doing better than I thought, he’s got lots of friends around him.’

Michael is now eating healthily but will stay blind and still faces the chance of losing a foot.

He said: ‘In my last two check-ups my blood sugars have been coming down. We’re on the right road now.’ 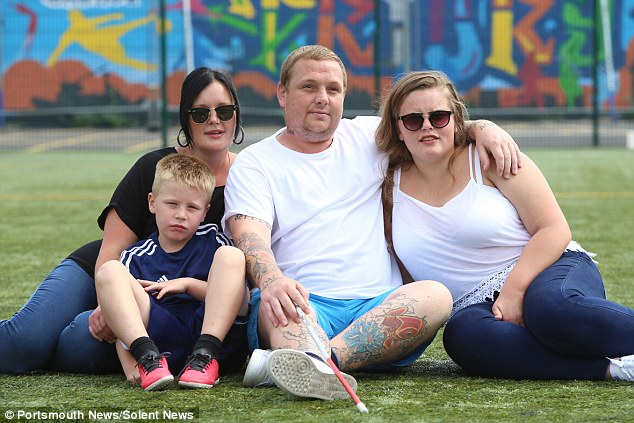 Now eating healthily, Mr Betteridge has decided to share his story in order to urge others with his condition not to ignore doctors’ warnings

Jimmy Wall, 37, who organised the event, said: ‘We just want to raise a little bit of awareness.

‘Mikey is a lovely fella, he’s a decent boy. When something happens in the community we all pull together.

‘It was easy for me to get a few lads together because of what it was for and who it was for.’

Daniel Howarth, head of care at charity Diabetes UK, said: ‘This serious condition, if left unmanaged, can lead to a wide range of devastating complications.

‘But having regular health checks can help minimise risks of developing complications.’

HOW DIABETES CAN DAMAGE THE EYES AND CAUSE BLINDNESS

Diabetic retinopathy or ‘retinopathy’ is damage to the retina (the ‘seeing’ part at the back of the eye) and is a complication that can affect people with diabetes.

Retinopathy is the most common cause of blindness among people of working age in the UK. 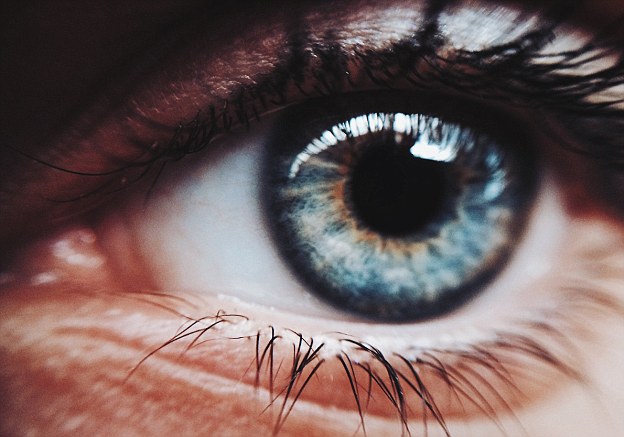 To see, light must be able to pass from the front of the eye through to the retina, being focused by the lens. The retina is the light-sensitive layer of cells at the back of the eye – the ‘seeing’ part of the eye. It converts the light into electrical signals. These signals are sent to your brain through the optic nerve and your brain interprets them to produce the images that you see.

A delicate network of blood vessels supplies the retina with blood. When those blood vessels become blocked, leaky or grow haphazardly, the retina becomes damaged and is unable to work properly. Retinopathy is damage to the retina.

Risks to your eyes

Persistent high levels of glucose can lead to damage in your eyes. To reduce the risk of eye problems, blood glucose, blood pressure and blood fats need to be kept within a target range, which should be agreed by you and your healthcare team. The aim of your diabetes treatment, with a healthy lifestyle, is to achieve these agreed targets.

Smoking also plays a major part in eye damage so, if you do smoke, stopping will be extremely helpful.