A gene that allowed humans to tolerate smoke from campfires may have sparked an evolutionary advantage over Neanderthals, scientists believe.

US researchers have pinpointed a genetic mutation that increases tolerance to the toxins in smoke.

Only found in humans, it makes it easier for us to breakdown polycyclic aromatic hydrocarbons and other poisons that can harm breathing and damage fertility. 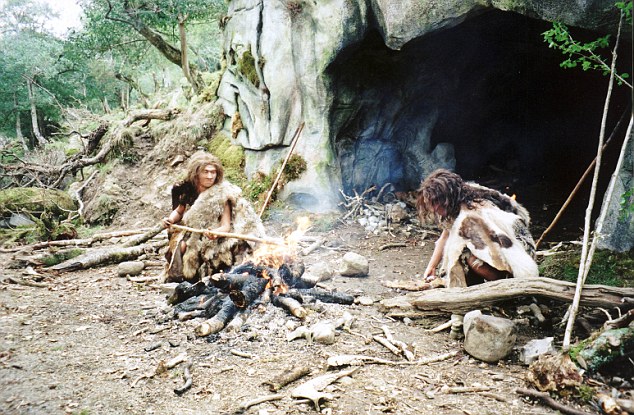 Campfires may have led to the Neanderthal’s mysterious decline some 40,000 years ago, a new study claims. A genetic mutation may have helped modern humans adapt to smoke exposure from fires, perhaps giving them an evolutionary advantage over their competitors

DID OUR DISEASES CAUSE NEANDERTHALS TO DIE OUT?

Modern humans have been blamed for killing off the Neanderthals by out competing them, breeding with them and even outright murdering them.

But recent research suggests it may actually have been infectious diseases carried by our modern ancestors as they migrated out of Africa that finished them off.

Anthropologists from Cambridge University and Oxford Brookes University say that new diseases carried by modern humans may have led to the downfall of Neanderthals.

They speculate that pathogens like Heliocbacter pylori, the bacteria that causes stomach ulcers, were brought to Europe by modern humans from Africa and may have infected Neanderthals, who would have been unable to fight off these new diseases.

At high concentrations, the smoke-derived toxins can increase the risk of respiratory infections and the chance of infant mortality in expectant mothers.

The mutation may have offered ancient humans a sweet spot in effectively processing some of the toxins, such as dioxins and polycyclic aromatic hydrocarbons, compared to other hominins.

The researchers believe a difference in the aryl hydrocarbon receptor, which regulates the body’s response to the toxins, may explain why humans are desensitised to certain smoke toxins and Neanderthals were not.

The mutation in the receptor is located in the middle of the ‘ligand-binding domain’ and is found in all present-day humans, Dr Perdew said.

Ligands are small molecules that attach to receptor proteins in certain areas in much the same way that keys fit into locks. 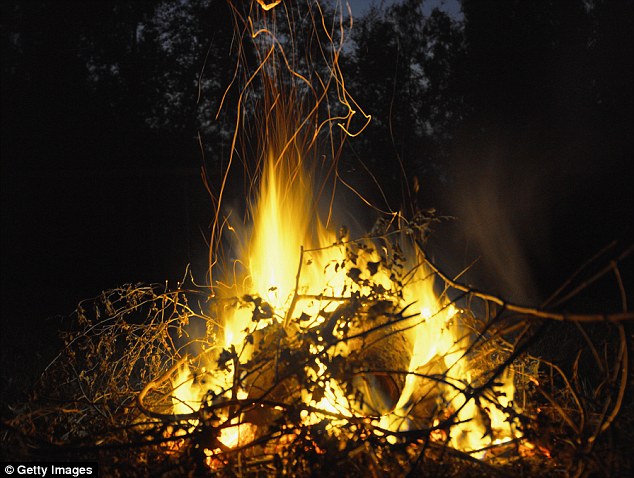 Modern humans are the only primates that carry the genetic mutation that potentially increased tolerance to toxic chemicals produced by fires (stock image) for cooking, protection and heating, said Gary Perdew of Penn State

HAS OUR TOLERANCE ENCOURAGED BAD HABITS?

He thinks the receptor gives us a better tolerance for cigarette smoke, allowing people to smoke, but also putting them at risk of cancer and other chronic diseases.

‘Our tolerance has allowed us to pick up bad habits,’ he said.

‘For Neanderthals, inhaling smoke and eating charcoal-broiled meat, they would be exposed to multiple sources of polycyclic aromatic hydrocarbons, which are known to be carcinogens and lead to cell death at high concentrations,’ he said.

‘The evolutionary hypothesis is, if Neanderthals were exposed to large amounts of these smoke-derived toxins, it could lead to respiratory problems, decreased reproductive capacity for women and increased susceptibility to respiratory viruses among preadolescents, while humans would exhibit decreased toxicity because they are more slowly metabolising these compounds.’

There is evidence that both humans and Neanderthals used fire, according to George Perry, assistant professor of anthropology and biology at the university. 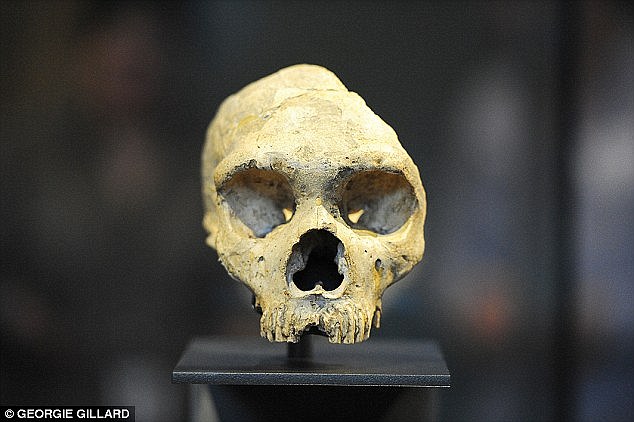 Neanderthals lived in the Middle Palaeolithic – the middle period of the Old Stone Age – roughly 200,000 to 40,000 years ago. A skull is pictured above

NEANDERTHALS INVENTED BOIL IN THE BAG

Neanderthals may have cooked stews in the skins of animals, according to some anthropologists.

Animal bones found at sites known to have been inhabited by Neanderthals are 90 per cent free of gnaw marks.

This suggests that fat and meat had instead been cooked off the bones.

A study of tooth plaque from the teeth of fossilised Neanderthal remains also suggest that they may have heated grains of barley.

However, there is no evidence that Neanderthals had any pots or pans to cook with.

Instead Professor John Speth, an archaeologist at the University of Michigan, believes that they used animal paunches and folded bark to make bags that they could boil their good in.

‘Our hominin ancestors – they would technically not be called humans at that time – were likely using fire at least a million years ago, and some infer an earlier control and use of fire approximately 2 million years ago,’ he said.

Fire would have played an important role for both humans and Neanderthals.

‘Cooking with fire could have allowed our ancestors to incorporate a broader range of foods in our diets, for example, by softening roots and tubers that might otherwise have been hard to chew.

‘Cooking could also help increase the digestibility of other foods, both in chewing time and reduced energetic investment in digestion.’

Fire also provided warmth, particularly in the higher latitudes, according to Professor Perry.

‘Besides heating and cooking, humans used – and still use – fire for landscape burning and as part of hunting and gathering, and now as part of agriculture, he said.

The study, published in the journal Molecular Biology and Evolution, supports a recent theory that cooking may have helped early humans thrive. 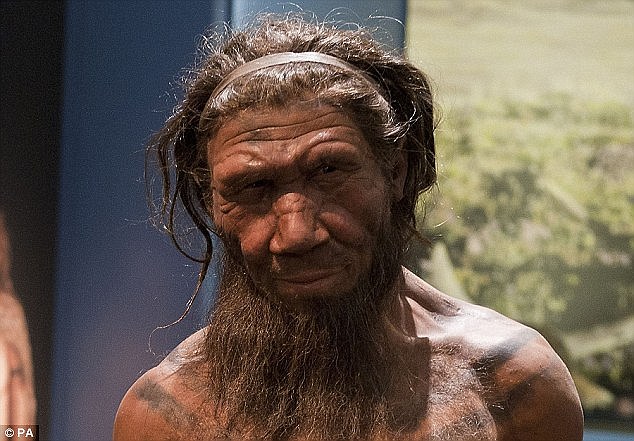 Dr Perdew said: ‘If Neanderthals (model shown) were exposed to large amounts of these smoke-derived toxins, it could lead to respiratory problems, decreased reproductive capacity for women and increased susceptibility to respiratory viruses among preadolescents,’

The researchers used computational and molecular techniques to examine the difference in the genetics of polycyclic aromatic hydrocarbon tolerance between humans and Neanderthals.

They looked at a genomic database of humans, Neanderthals and a Denisovan – hominin more closely related to Neanderthals than humans.

‘We thought the differences in aryl hydrocarbon receptor ligand sensitivity would be about ten-fold, but when we looked at it closely, the differences turned out to be huge,’ Dr Perdew said.

‘Having this mutation made a dramatic difference. It was a hundred-fold to as much of a thousand-fold difference.’

NEANDERTHALS WERE NOT SO STUPID AFTER ALL

Neanderthals first emerged around 280,000 years ago, spreading to inhabit much of Europe and parts of Asia, but they eventually died out 40,000 years ago.

The reason for their demise was often put down to being a more primitive species of human that was unable to compete against the more sophisticated Homo sapiens.

They were depicted as thuggish cavemen that scraped an existence on the cold lands of ice age Europe.

However, a series of discoveries are now putting Neanderthals into a new light. Stone tools discovered at sites they inhabited suggest they were skilled tool makers with adept hand eye coordination.

A 60,000-year-old multi-purpose bone tool unearthed in France also suggests Neanderthals understood how to use bones to make useful devices

A recent discovery by researchers at the Muséum National d’Histories Naturelle in Paris suggests that Neanderthals may have built homes using the materials they found around them.

They discovered a 26 feet wide building created 44,000 years ago from mammoth bones.

Many of the bones had also been decorated carvings and ochre pigments.

Cross-hatched engravings found inside Gorham’s Cave in Gibraltar are also thought to be the first known examples of Neanderthal rock art.

DNA analysis has also shown that Neanderthals carried the same genes that are thought to have enabled modern humans to speak. 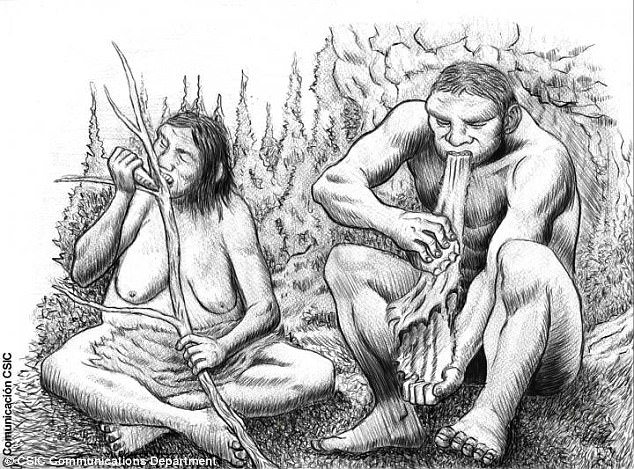