Even preemies who receive breathing treatments to improve lung function early in life may have respiratory challenges as children and adolescents, a study suggests.

Researchers focused on the most vulnerable subset of premature babies: those born at no more than 28 weeks gestation.

These babies are too frail and weak to breathe on their own; they often lack a lining in the lungs known as surfactant that keeps tiny air spaces called alveoli from collapsing with each exhalation. 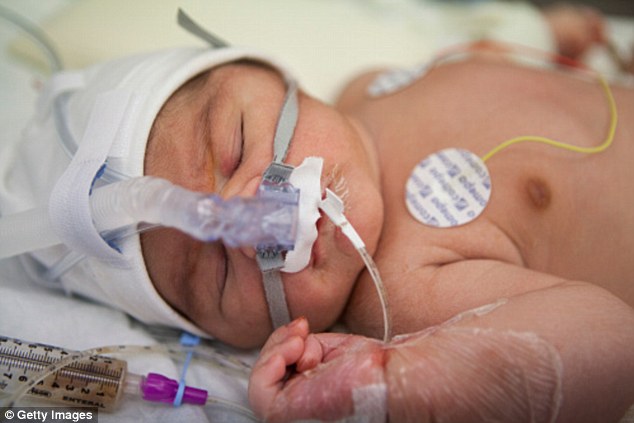 When researchers examined data on about 300 extremely small, low birth weight babies, they found these early arrivals were much more likely to have small airway obstruction at ages eight and 18 than a group of 260 otherwise similar babies who were born full-term and normal size.

Furthermore, the preemies had a greater increase in small airway obstruction between ages eight and 18, compared with full-term babies.

‘Since surfactant in healthy pregnancies is produced mostly after 34-35 weeks of pregnancy in the fetus, infants born before this time are more likely than babies born after 34-35 weeks to have surfactant deficiency, and hence breathing difficulty after birth,’ said lead study author Dr Lex Doyle, a pediatrics researcher at the Royal Women’s Hospital in Australia.

A typical pregnancy lasts about 40 weeks and babies that arrive after 37 weeks are considered full term. In the weeks immediately after birth, preemies often have difficulty breathing and digesting food.

Some premature infants also encounter longer term challenges such as impaired vision, hearing, and cognitive skills as well as social and behavioral problems.

For the current study, Doyle and colleagues focused on infants born in 1991 to 1992, just as synthetic and natural surfactants made of lipids and proteins became available in Australia to treat preterm infants.

Doctors can inject liquid containing these surfactants directly into the air passages of the lung to improve breathing.

Within the preemie group, the subset of early arrivals who also had lung damage caused by time on a respirator or long-term oxygen use had worse lung function at age 8 and age 18 than the preterm babies that didn’t have these issues.

Knowledge that [someone] were born preterm and any complications they had should be part of their medical history for life
Dr Lex Doyle, Royal Women’s Hospital

In addition, preemies who became smokers by age 18 also had worse lung function than preemies who never smoked, researchers report in the journal Thorax.

One limitation of the study is the lack of follow-up after age 18, because lung development typically continues into the 20s, the authors note.

Still, the findings suggest that as preemies become adults, they need to make sure to alert doctors about their early arrival and be monitored for potential breathing problems, Doyle said.

‘Knowledge that they were born preterm and any complications they had should be part of their medical history for life,’ Doyle said.

‘They would, of course, also be wise not to smoke.’

Parents and children should also pay close attention to any shortness of breath, especially during exercise, said Dr. Marjaana Tikanmaki, a researcher at the National Institute for Health and Welfare and University of Oulu in Finland.

‘It could be a sign of airway obstruction,’ Tikanmaki, who wasn’t involved in the study, said.

‘Reversible airway obstruction, asthma, can be treated with regular inhaled corticosteroids and with salbutamol that opens small airways in acute shortage of breath.’