A pair of twins conjoined at the head have been successfully separated after a 20-hour operation.

Anias and Jadon McDonald, 13 months old, are recovering in the Bronx’s Montefiore Hospital after their life-threatening operation on Thursday.

According to their surgeon – Dr James Goodrich – it is incredible they made it this far.

Half way through the operation, the veteran neurosurgeon considered stopping the procedure altogether when they discovered the boys shared far more brain tissue than they had expected – even despite using 3D imaging to prepare. 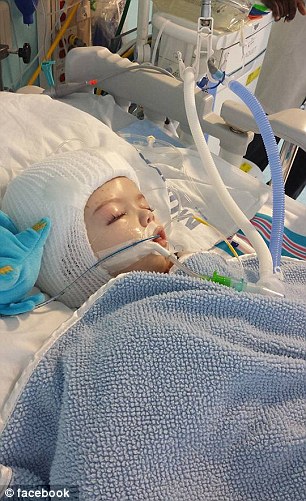 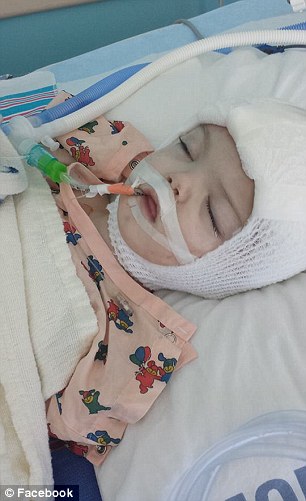 Made it out: Jadon (left) and Anias (right) pictured recovering in their ward on Friday 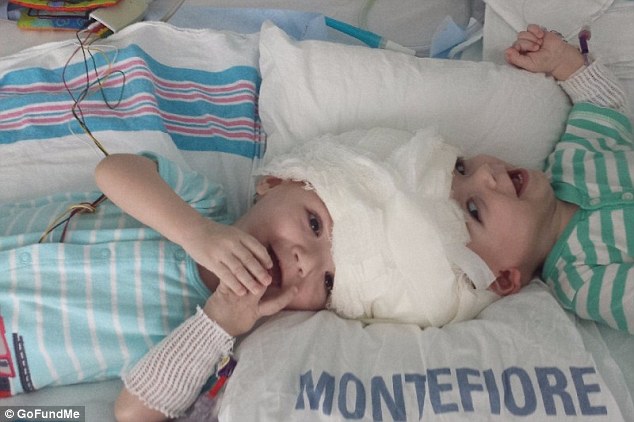 Anias was still in surgery late on Friday morning since he was more affected by the separation of their brain tissue. He eventually came out the operating room at 1pm on Friday 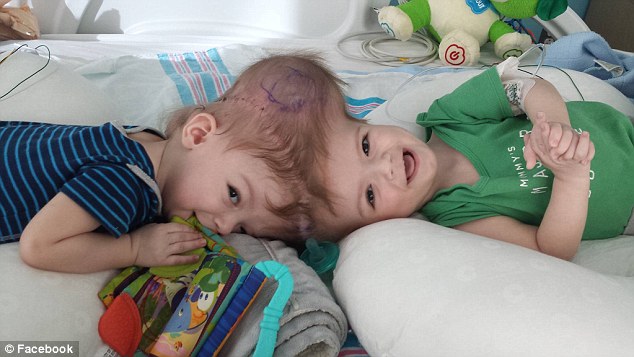 Extraordinary: Anias and Jadon McDonald underwent surgery to be separated. Surgeons placed expanding tissues in their heads months before to stretch the skin so there would be enough for them to stitch each on back up individually afterwards

With every cut, Anias’ heart rate and blood pressure plummeted.

Eventually he found an opening and continued, successfully separating the two.

However, it means that while Jadon was wheeled out at 7am into the ward, Anias was still in surgery late on Friday morning.

He was finally returned to his family at 1pm on Friday. Doctors warned he could face severe physical issues.

Their parents Nicole and Christian, from near Chicago, Illinois, sat in the waiting room the whole time.

Nicole, 31, took to Facebook on Friday to explain all the details to the thousands of people that have followed the family’s story.

‘The overall atmosphere was one of celebration mixed with uncertainty,’ she explained.

‘Anias really got rocked in this procedure. It really now is up to God in terms of how he recovers.’

She added: ‘I keep picturing Anias smiling behind his right middle finger in his mouth. Twenty four hours ago he was so rambunctious…full of life. God please give me my baby back.’

Describing Jadon’s ordeal, Nicole wrote: ‘Jadon is such a rock star. They said he hardly batted an eye through the whole procedure in terms of maintaining his vitals.

‘It’s a bit surreal to sit here and type this…I should feel so happy…TWO SEPARATE BABIES!!!…and yet I ache with the uncertainty of the future.

The overall atmosphere was one of celebration mixed with uncertainty
Nicole McDonald, their mother

‘I didn’t cry until the surgeon’s left the room. I was barely able to even utter the words “thank you” because of the pit that still sits heavy in my stomach. We are standing on the brink of a vast unknown.’

They boys were born via cesarean section last September near Chicago, Illinois.

They were attached by the crown of the head.

Nicole and 37-year-old Christian insisted the boys were perfect as they were.

But in order to let them lead a normal life, they have traveled to Montefiore Hospital in the Bronx, New York, to have one of the world’s most esteemed surgeons perform the incredibly rare operation to separate their heads. 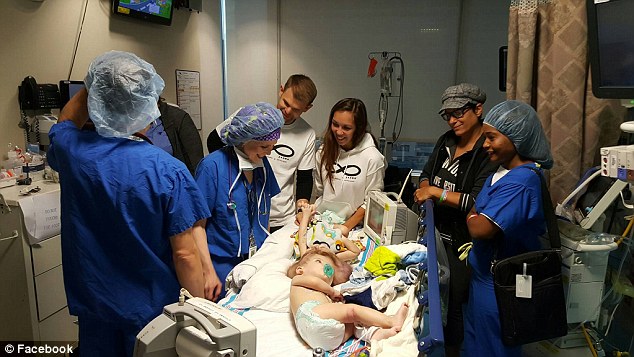 Long wait: Their parents Nicole and Christian (pictured in white) stand in the ward with the surgeons as the boys get ready for their 20-hour surgery on Thursday in Montefiore Hospital 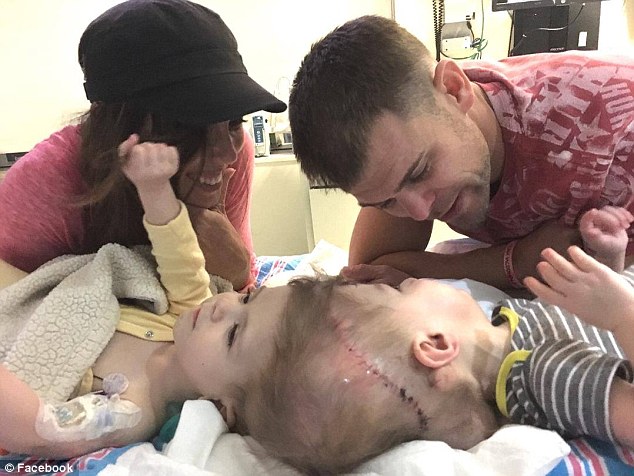 Happy: Nicole, 31, and 37-year-old Christian, insisted the boys were perfect as they were

The boys were wheeled into the operating theater at 7.15am on Thursday.

‘I could almost keep them like this,’ Nicole told CNN before the operation, admitting that she had become attached to the boys this way.

She said she knew this was for the best, but the fear that something could go wrong during surgery was excruciating.

‘This is so hard. I’m not going to sugarcoat it,’ she said.

Anias and Jadon, who have a three-year-old brother Aza, are technically called ‘craniopagus twins’ – a phenomenon that occurs just once in every 2.5 million births.

Based on national statistics, it is astonishing they made it to 13 months.

Around 40 per cent of craniopagus twins are stillborn.

Of those that survive, a third die within 24 hours of birth. 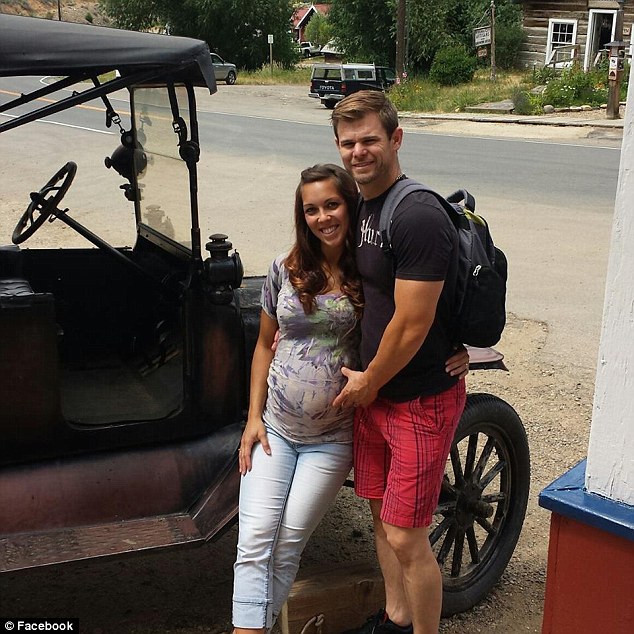 The couple, who live near Chicago, already have a three-year-old son, Aza 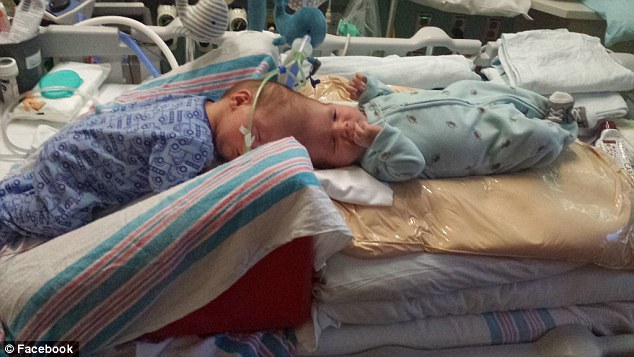 Their twins were born via cesarean section last September 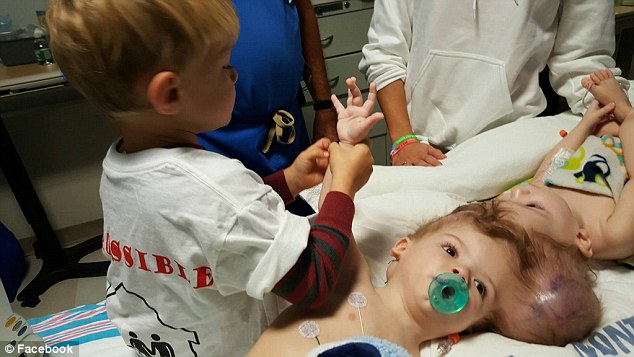 They are pictured here waiting for surgery with their brother Aza 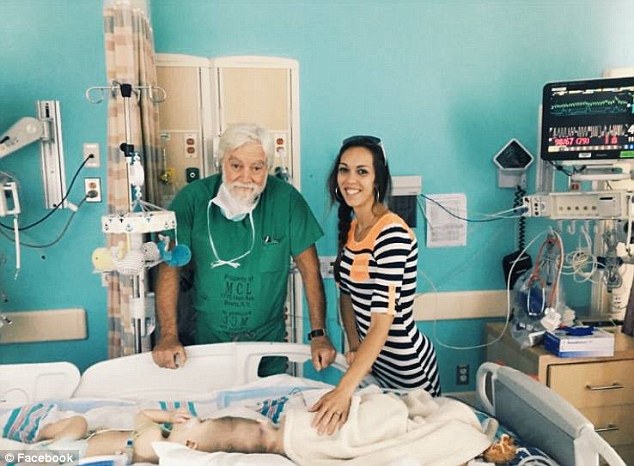 The operation was performed by Dr James Goodrich (pictured), a neurosurgeon who specializes in separating conjoined twins at the head

If craniopagus twins survive that point, there is still an 80 per cent risk they would die before the age of two if they are not separated.

Separation means one or both of the twins may suffer developmental complications.

‘We know that is definitely a real possibility, but we’re still going to love our boys,’ Christian said before the surgery.

It is now clear Anias will likely suffer more severe disabilities than his twin brother.

The operation was performed by Dr James Goodrich, a neurosurgeon who specializes in separating conjoined twins at the head.

Dr Oren Tepper, a plastic surgeon, was in the room to reconstruct the skulls and stitch each head closed.

The team has spent months practicing and planning their strategy using a physical 3D model of the boys’ heads, plus computerized 3D modeling, where they can look at different scenarios. 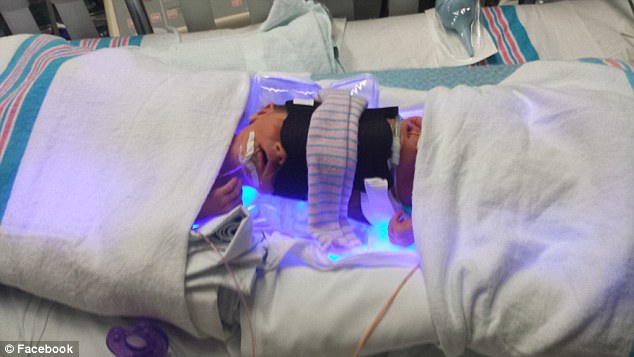 Based on national statistics, it is astonishing they have made it to 13 months. Around 40 per cent of craniopagus twins are stillborn. Of those that survive, a third die within 24 hours 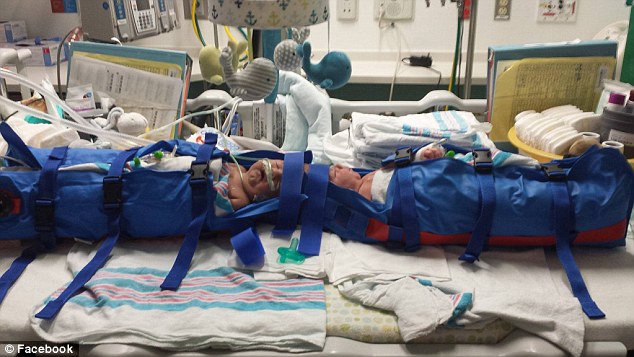 They will spend 72 hours in intensive care, then months in a rehab center

‘This is about as complicated as it gets,’ Dr Goodrich told CNN.

‘I know the vascular system we have to go through is complex.

But even despite the state-of-the-art technology, they were not prepared for the 5x7cm brain tissue the boys shared, that they had to separate.

They will now spend 72 hours in intensive care, then months in a rehab center.

According to Dr Goodrich, their speech skills will not be affected, given that he is dealing with the back of the brain, but there is a chance they will struggle with movement.

He told CNN: ‘They have no back control because they’ve never sat up. They’ve never crawled.’

The family has health insurance, which covers a significant amount of the $ 2.5 million surgery.

To donate, visit their GoFundMe page. 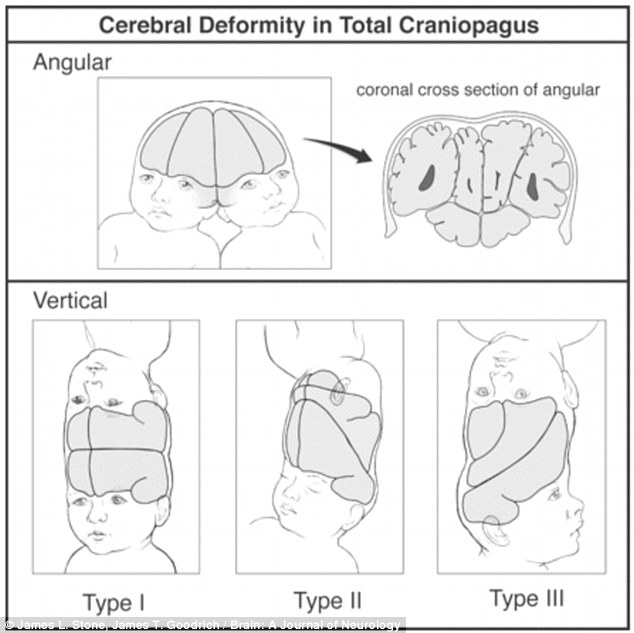 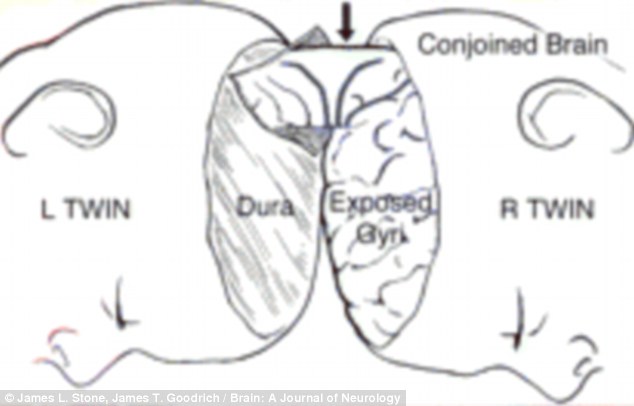 Doctors have spent the last few months placing tissue expanders in the boys’ head to make it easier to separate them, leaving enough skin to stitch each head back up. The difficult process will be separating the tangled veins the boys share, not dissimilar to that in this diagram

Can a jab of stem cells repair damage caused by a heart attack?

Women addicted to their phones at risk of depression