By Kate Pickles and Madlen Davies for MailOnline

The largest study of its kind has found a typical packed lunch serves up more than a six-year-old’s entire daily sugar limit.

The Children’s Food Trust looked at the top types of foods eaten by under-16’s in hundreds of millions of packed lunches in the last year.

It found products like sugary treats are among the top foods many children ask to have because they enjoy the taste.

The news comes after a number of councils banned children from bringing packed lunches, forcing them to eat a more balanced school dinner.

Today, leading obesity experts admitted many parents still do not know how to create a healthy lunch box. 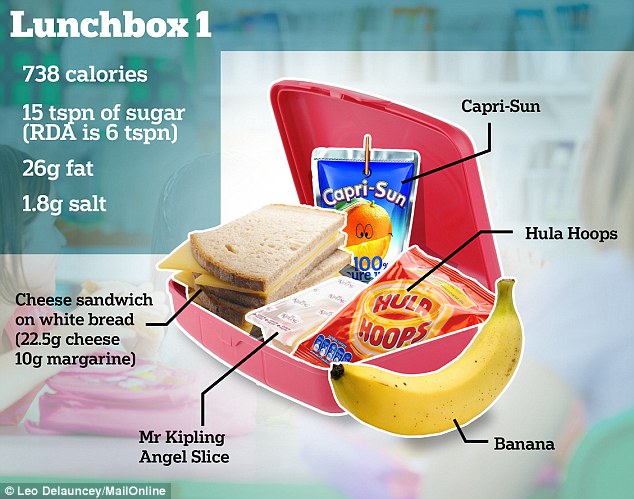 This example of a typical lunchbox, including a cheese sandwich on white bread, crisps, cake and drink contains almost three times the recommended amount of sugar for a seven to 10-year-old 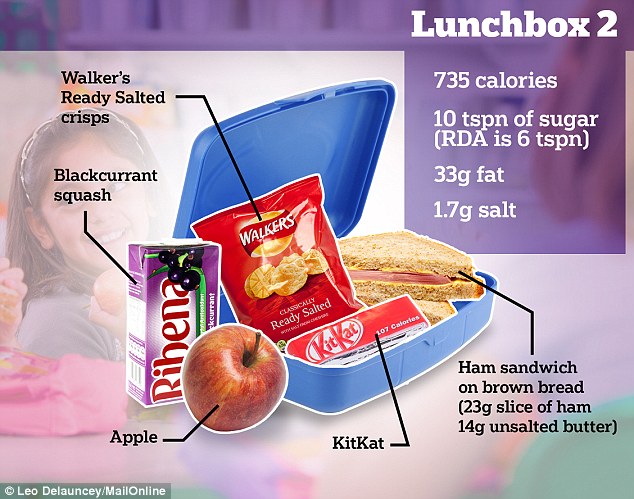 Another example, based on information provided by The Children’s Food Trust survey, shows how a sandwich, crisps, drink and an apple can contain a staggering 33g of fat

Tam Fry from the National Obesity Forum, told MailOnline nothing would change unless parents were given more help.

‘It doesn’t surprise me at all that children are still getting packed lunches with almost no nutritional value,’ he said.

‘Children naturally pester their parents for sugary food. But there are so many things that could be put into lunchboxes if parents knew what to do.

‘The problem is, the majority of people don’t know. It is a shame when schools are trying their best to encourage healthy eating with balance school meals.’

While fruit and vegetables were among the top 20 packed lunch items, treats like chocolate bars now banned from being sold in school canteens and vending machines also featured heavily.

The survey found popular lunchbox brands which contained high levels of sugar include:

Most of the sugar content found in packed lunches comes from free sugars.

These are sugars added to food such as sucrose and glucose or those naturally present in honey, syrups and unsweetened fruit juices.

It does not include sugar naturally present in milk or whole fruit and vegetables.

One in five children starting school are now either overweight or obese. 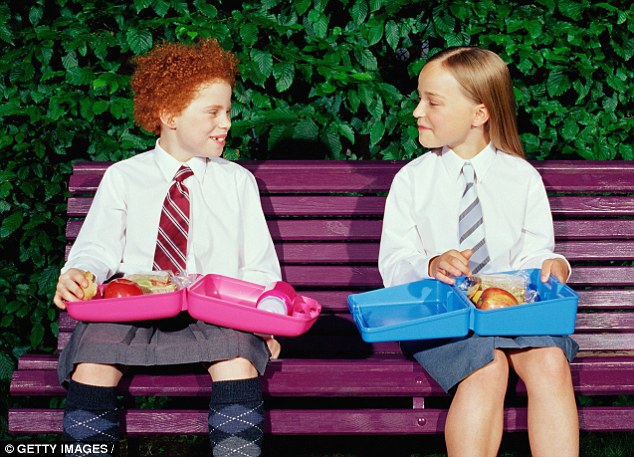 But she admitted it was ‘so tough for parents’ to get the right balance.

‘Families often choose packed lunches as simple reassurance that their children will eat something during the school day or on a day out – fussy eating is a huge worry for so many mums and dads,’ she said.

Ham sandwich – made with two slices supermarket own brand medium sliced wholemeal bread and thinly-spread margarine and one average slice of ham.

This lunch meets the dietary recommendations for a seven to 10 year old based on the recommendation that lunch should provide about 30 per cent of daily intake.

‘But when it’s foods like crisps, chocolate biscuits and sugary carton fruit drinks that kids are asking for in their lunchboxes, or eating because they say they like those foods, we’ve got a problem.

‘They’re filling up on empty calories which won’t leave kids feeling at their best.’

Bread and margarine were the most common items with fruit in third place.

A standard portion of the most-consumed brands gives a six-year-old more than their entire daily recommended intake of free sugars in one go.

Making simple switches such as swapping these for milk or water would be one simple way of cutting down sugar intake.

THE HIDDEN SUGARS IN CHILDREN’S LUNCHBOXES

Lunches should provide a child about 30 per cent of their daily intake of sugar, salt and fat.

But many parents are unwittingly far exceeding this as typical lunches below demonstrate. 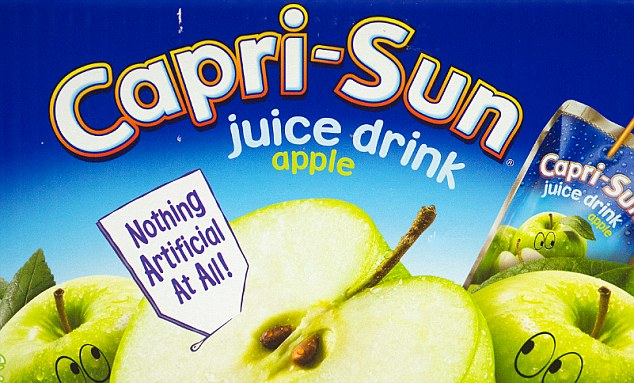 Capri-Suns are a popular part of children’s lunchboxes but can contain up to three teaspoons of sugar, health experts have warned

This packed lunch contains more than five times (514 per cent) the amount of free sugars that a seven to 10 year-old should have at lunchtime. 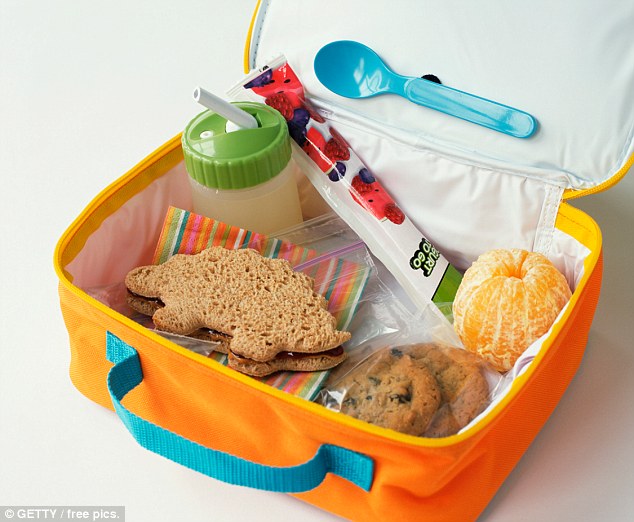 This packed lunch delivers more than two and a half times (274 per cent) the amount of free sugar that a seven to 10 year-old should have at lunchtime.

SO WHAT SHOULD YOU BE PUTTING IN YOUR CHILD’S LUNCH?

The Children’s Food Trust has come up with the following food cheats to help children have an enjoyable but healthy lunchbox. 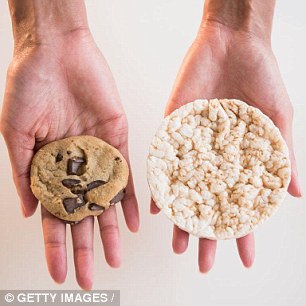 Get children involved in choosing and preparing what goes into their lunchbox, to help encourage them to eat it.

Pre-prepared fruit and veg are generally more expensive than doing it yourself, so get some small pots and prep them yourself to cut the cost.

Using leftovers as part of packed lunches is a good way to cut down the prep time, but make it’s cooled and stored properly.

Make sure that what you pack is easy for little fingers to open, and to eat.

Children often love a bit of DIY – wraps and pots of fillings can be more exciting if they get to put them together.

Dipping foods rule for many kids, so give breadsticks or toast fingers, veg sticks and a pot of houmous or our fabulous fish pate a try.

Women are waiting 10 years for docs to spot endometriosis